Hooking students into Shakespeare can be a daunting task. There’s the language barrier, the different time period, funny clothing, acting…. it’s no wonder students can be reluctant at the beginning of a Shakespeare unit. But here are ten engaging ways to introduce a Shakespeare unit that will hook them from the first day. Be sure to check out the related 20 activities in the Ultimate Shakespeare Introduction Kit for even more ideas and activities!

This is probably the golden standard for beginning any unit on Shakespeare. In fact, there are handouts available all over the Internet for this activity, and you can even find a free copy of my version in the Freebie Library. In short, the way it works is that students select words from three columns to form an insult using Shakespeare’s language. I like to have my students take this activity one step further and translate the insult into modern-day language, using the dictionary as needed. That way, this fun activity serves the purpose of familiarizing students with some of Shakespeare’s vocabulary. Simply have students craft three insults to share with a group and then work together to translate them into modern-day English. 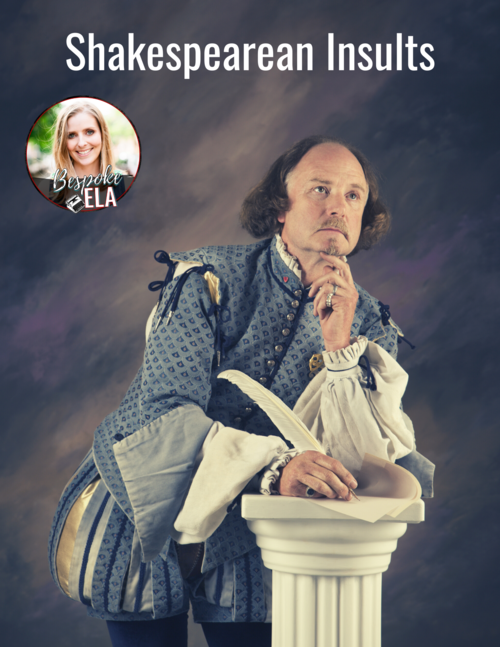 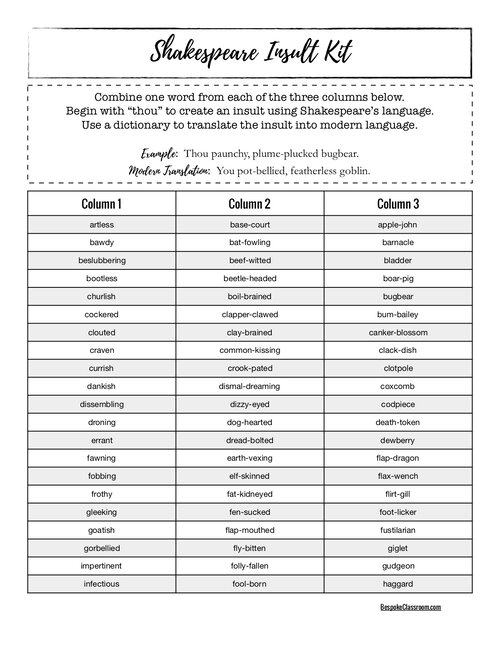 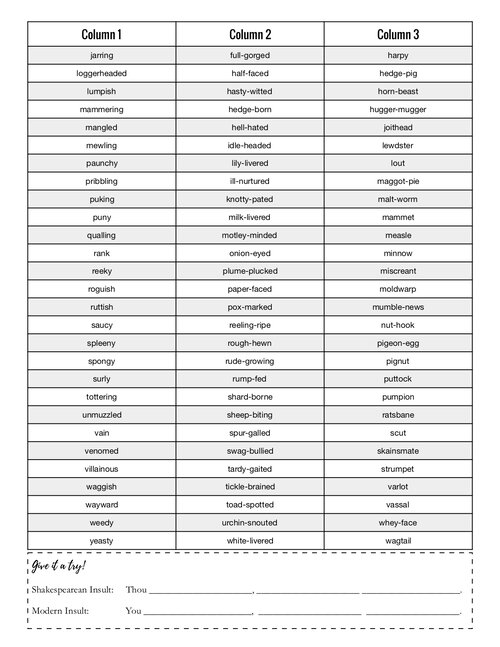 INTRODUCE SHAKESPEARE’S LANGUAGE WITH A SONNET

Another great way to familiarize students with Shakespeare’s language is to begin with a shorter piece, and a famous sonnet does just that! I like to use either Sonnet 116 or 18, but any sonnet should do the trick. Have students work in groups to paraphrase the sonnet using a dictionary and then discuss the sonnet as a class, including the challenges students faced while translating the poem. As an extension activity, give students the opportunity to write their own original sonnets using Shakespeare’s language. The Bespoke ELA Intro. to Shakespeare Kit contains a dictionary of common Shakespeare terms to help students use the Bard’s vocabulary. You can find a FREE analysis activity for Shakespeare’s Sonnet 18 in the Bespoke ELA Freebie Library. Be sure to subscribe TODAY to unlock free lessons to print and use in your secondary ELA classroom. 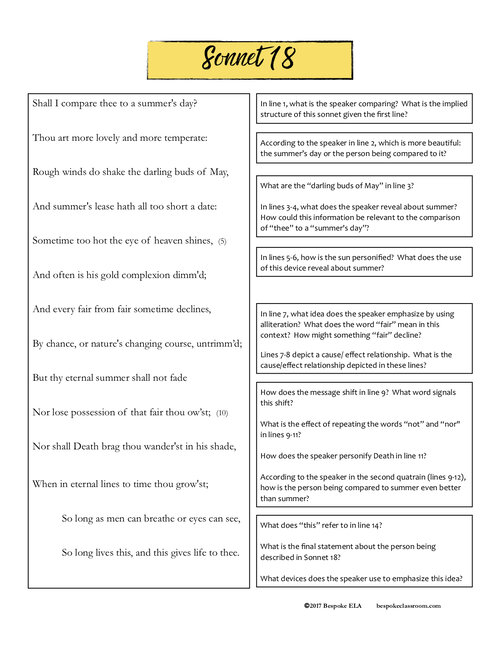 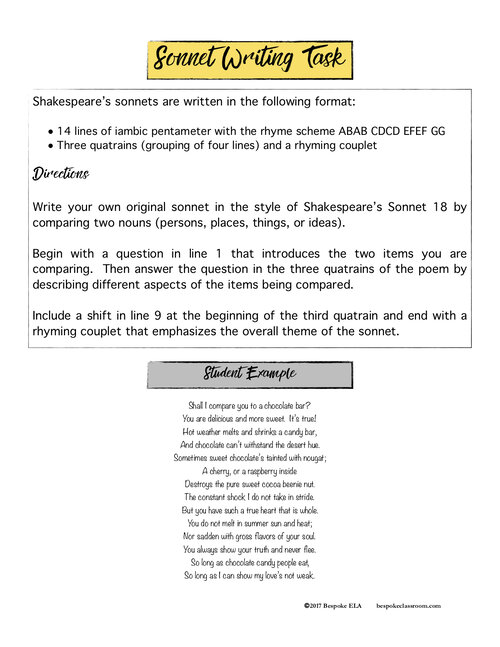 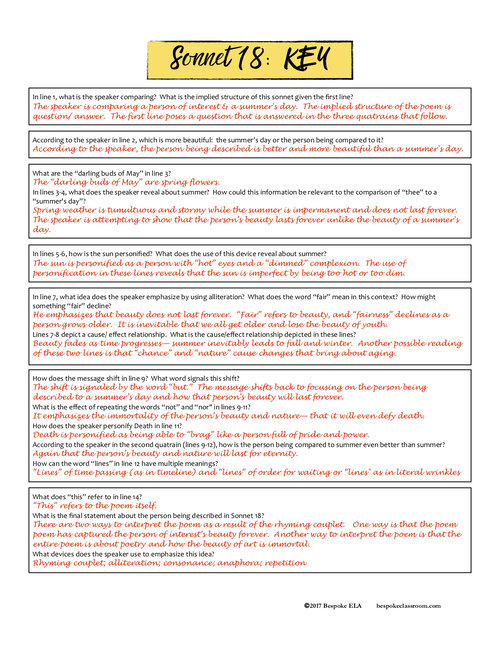 BEGIN WITH A FAMOUS SOLILOQUY

I think it’s usually no secret to students that a Shakespearean tragedy is going to be just that— tragic. By beginning with a famous soliloquy from the play, students can begin to characterize the tragic hero before they begin reading, and they can make predictions either about how the character became that way or what the character might do next. For example, if you are teaching Macbeth, you might start with his “Is this a dagger which I see before me?” soliloquy and have students analyze Macbeth’s tortured mind. They will realize that he is #1) going to kill someone #2) conflicted about it #3) does it for ambition. This sets up the major theme of the play— that ambition leads to corruption but also guilt— and can inspire a class discussion about the consequences of ambition. Students can also make a prediction about how Macbeth became so ambitious and what might lead to his tragic end— all before they ever read the play. I find that this strategy helps both with comprehension and character analysis as students begin to read the play.

Using a WebQuest will enable students to research information about the life, times, and works of Shakespeare. In fact, I like to have my students get into groups and create their own WebQuests with questions, websites, and answers— and then have them swap WebQuests with another group to complete. I find that having them do the work to create the WebQuest takes them through the research process while taking ownership of their learning. They also have fun with the challenge of completing another group’s WebQuest. You can give them specific criteria such as including at least three websites, writing at least ten questions, and including information about Shakespeare’s life and the specific play of study. At the end of the WebQuest, students can then write key words, phrases, facts, and ideas from their research on the board to create a collective Graffiti Wall that other classes can use as a Gallery Walk. This makes for a nice, no-prep Shakespeare lesson— as long as you have computers!

PHRASES WE OWE TO SHAKESPEARE

CREATE AN INFOGRAPHIC OR ONE-PAGER OF SHAKESPEARE’S LIFE

Students can then share their infographics or put their one-pagers on display in the classroom to reference throughout their study of Shakespeare’s works.

For this activity, students are given 5-10 debatable thematic statements that encompass themes from Shakespeare’s works. Students can then either agree or disagree with each statement and then write their rationales for their side of the argument. Alternatively, you can have students complete this activity as a four-corners lesson. To do it this way, designate the four corners of your classroom as: “Strongly Agree,” “Agree,” “Disagree,” “Strongly Disagree.” As you read out the statements to the class, students can move to the corner that represents their opinion on the thematic idea. You can select specific statements that correlate to the specific play of study, or you can use more generalized thematic statements that are represented by Shakespeare’s body of work as a whole. Here are some statements to get you started:

You can find this activity as part of the Bespoke ELA Intro. to Shakespeare Kit if you’d like something ready to print and use.

Don’t be afraid to use film clips of scenes from the play before students begin to read. After all, Shakespeare was never meant to be read sitting in a desk. It was meant to be seen as a performance. Show students clips of the most important scenes from the play and have them summarize what they think happens in each scene and then discuss. Beginning this way will help dispel comprehension issues as students read.

Get students up and ACTING to start a Shakespeare unit. Give them copies of Shakespeare’s famous passage on the “seven ages of man.” Have students work in groups to create a skit that acts out the text as a narrator reads. Students will have fun with this performance, and it will get them into the spirit of drama right from the start.

GizNoise is all about tech, health & lifestyle and all other different related topics.

We use cookies on our website to give you the most relevant experience by remembering your preferences and repeat visits. By clicking “Accept All”, you consent to the use of ALL the cookies. However, you may visit "Cookie Settings" to provide a controlled consent.
Cookie SettingsAccept All
Manage consent

This website uses cookies to improve your experience while you navigate through the website. Out of these, the cookies that are categorized as necessary are stored on your browser as they are essential for the working of basic functionalities of the website. We also use third-party cookies that help us analyze and understand how you use this website. These cookies will be stored in your browser only with your consent. You also have the option to opt-out of these cookies. But opting out of some of these cookies may affect your browsing experience.
Necessary Always Enabled
Necessary cookies are absolutely essential for the website to function properly. These cookies ensure basic functionalities and security features of the website, anonymously.
Functional
Functional cookies help to perform certain functionalities like sharing the content of the website on social media platforms, collect feedbacks, and other third-party features.
Performance
Performance cookies are used to understand and analyze the key performance indexes of the website which helps in delivering a better user experience for the visitors.
Analytics
Analytical cookies are used to understand how visitors interact with the website. These cookies help provide information on metrics the number of visitors, bounce rate, traffic source, etc.
Advertisement
Advertisement cookies are used to provide visitors with relevant ads and marketing campaigns. These cookies track visitors across websites and collect information to provide customized ads.
Others
Other uncategorized cookies are those that are being analyzed and have not been classified into a category as yet.
SAVE & ACCEPT